HomeIllustrationThe Hands of Time Garden Design for the Hunt Museum – we’re in the Final!

The Plan for the Hands of Time Garden: 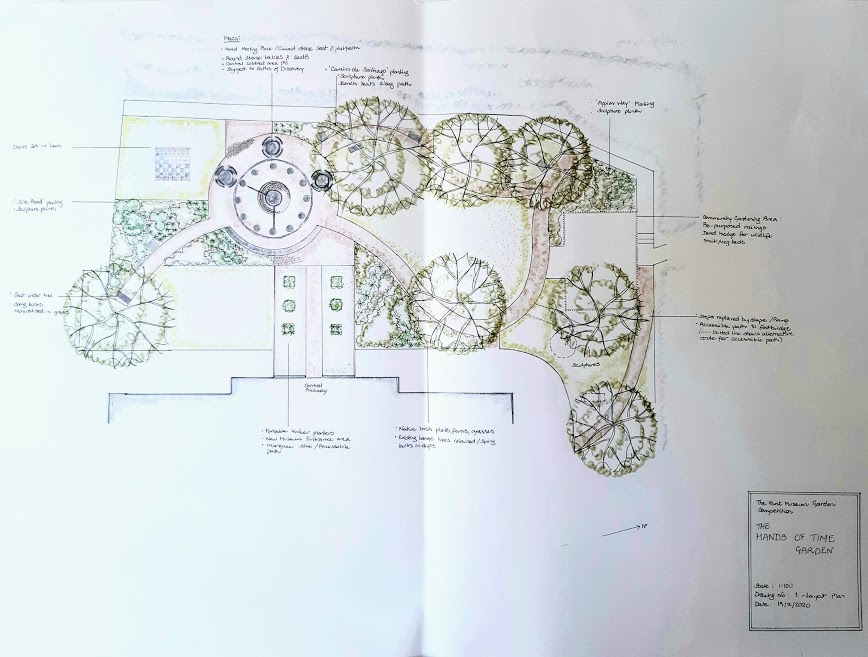 I’m absolutely delighted to have been selected as one of the three finalists in the Hunt Museum Garden Competition.  Based on the private collection of art and artifacts gathered by the late John and Gertrude Hunt, the Hunt Museum is a small gem of a museum located in a beautiful Georgian building in the heart of Limerick City. Originally built as Limerick’s Customs House, the museum building faces on to the River Shannon, and earlier this year, designers were invited to submit concepts for the planned new garden.

As anyone who follows me on social media will know, I’m never far away from an exhibition, gallery or museum of some sort, especially when travelling, so how could I resist?

The three final designs can be seen on the Hunt Museum’s website on this link: https://www.huntmuseum.com/2020/03/30/hunt-museum-in-a-garden-design-submissions/

You can comment on the designs there and click to ‘like’ your favourite, but obviously space there is limited, so in this post I’ll try and explain how the Hands of Time garden design came about and give you a closer look at some of my ideas.

Firstly, the Hunt Museum is located in Limerick city and I’m based in south County Galway, about forty minutes away by motorway (that’s just down the road in terms of some of the gardens I’ve worked on!)

The brief was to create a public urban garden to complement the Georgian building, allowing space for some supersize museum object sculptures, a garden chess set and a temporary 200 square metre marquee for corporate events.  The garden needed to be fully accessible, easily maintained and attractive to museum visitors, locals, tourists, community groups and schoolchildren, with room for informal meetings and picnics.  The existing mature trees and lighting needed to remain, and the garden should incorporate native planting, while providing good value for money with the lowest possible carbon footprint.

It’s a fairly long list, to be sure, but I can’t resist a challenge – and figuring out how to achieve everything on a client’s wish list within budget and site constraints is basically my day job!

The concept was developed during my recent visit to the Hunt Museum when I was struck by the ingenuity and beauty of objects created by human hands, from prehistoric up to recent times and from many different corners of the world.

As the objects in the collection have travelled, some from as near as Limerick itself and some from the other side of the globe, the garden invites the visitor to travel through time and space,  and consider the wonders that human hands can create through collaboration and the sharing of ideas and technologies.

A circular plaza contains round stone tables with seats, and offers a meeting place and a chance to rest on a journey through the garden or along the waterfront.  The location benefits from reflected light and views over the Shannon.  Paved with warm terracotta blocks, it reflects the red brick Georgian buildings visible from the garden while offering a contrast to the grey stone elsewhere.

The dimensions of the paved circle suit the proportions of the museum building, while its curves sit well with the straight lines of the classically styled architecture. The grey limestone of the building is repeated in a curved paved seat at the inner side of the plaza, and in a round limestone platform 40cm high which also acts as a seat and may be used for a sculpture in the future.

A circle immediately surrounding the platform is paved with round beach cobbles pressed into bronze coloured concrete, providing a sensory change in texture, inspired by an ancient bronze shield in the museum’s collection.

Inside a circle of grey setts, twelve flat circular stones are set into the ground, suggesting time – the hours of the day and and the months of the year. Grey ‘hands’ set into the ground point to a time (chosen to be significant to the city or the museum). This brings the ‘Hands of Time’ literally into the very heart of the garden. This will also provide play and learning opportunities for children.

Travels in Time – the Paths of Discovery

Three paths wind through the space, inviting the visitor to interact with the garden and its contents.  Each path represents a celebrated ancient route, suggested by the artefacts in the museum as laid out on each of its three floors.

A signpost points to the beginning of the three paths, each named after a famous route which would have been travelled by people from many different nations, for very different reasons.  They are The Silk Road, The Camino di Santiago and the Appian Way.

All three paths converge in the circular plaza, reflecting the way in which centuries of craftsmanship, religious beliefs and commercial activity have resulted in the Hunt Museum Collection.

This meeting of minds, cultures and purposes continues today in the contemporary use of the plaza – a place for people to meet, communicate and contemplate surroundings.

The joining of the three paths reflects the meeting of past, present, and future, as encapsulated by the new Hunt Museum Strategy 2025.

The Silk Road path, named after the ancient trading route linking Europe to the Orient, is inspired by the fabulous collection encompassing the development of the decorative arts, located on the museum’s First Floor.  It curves past planted areas that are a rich tapestry of colour, including plants native to the East / China, many of which are currently grown in gardens here in Ireland thanks to the endeavours of plant hunters since the eighteenth century. It features a mulberry tree, the leaves of which are needed for the production of silk. It’s also a nod to the building’s original purpose as Customs House, acknowledging the unusual and exotic cargoes brought here by ships and their influence on this country’s culture and development.

The Camino di Santiago path is named after the famous pilgrimage route in Northern Spain and reflects the collection of objects with religious significance displayed on the Ground Floor.  It is flanked by plants which grow there and also flourish here in Ireland, just as the Camino is still travelled today by a new generation of Irish and international visitors.

The third route, the Appian Way  path, is named after the most famous of the Ancient Roman roads, the Via Appia, and represents the museum’s archaeological collection located on the Top Floor.  It evokes the influence of ancient and classical civilisations on many aspects of modern life , including building, architecture, engineering and democracy.  The border beside this path features Meditteranean plants and plants familiar to the ancient Romans, still popular today.

An accessible path runs from the Central Museum Door to the plaza, flanked each side by edged rectangles of beach pebbles – a nod to the many foreign shores from which goods and more recently, museum artifacts, have reached this place.  It has a practical purpose, allowing scope for future changes when the museum’s main entrance is relocated.

Generously sized painted wooden planting containers stand in a row each side of the central path (produced with / by the community groups), which can be moved when necessary.

This rectangle, and the rectangle of lawn to the immediate left, provide a clear 20m x 10m space for the siting of a 200 square metre marquee for events.

Drifts of spring bulbs naturalised in the grass reflect the blue of the sky and river and provide pollen for early bees, supporting biodiversity.

To the right of this area, the largest planted area in the garden is home to a host of native plants with evergreens, ferns, perennials and grasses providing colour and interest throughout the year, as well as encouraging beneficial wildlife into the garden.

The existing railings are moved to the bridge side of the garden and re-deployed to enclose a rectangular area (size to be agreed in consultation with relevant groups) suitable for community gardening activities.

A new path curves to the right, leading to a gently sloped ramp, providing wheelchair / mobility / buggy access to the footbridge.

The three final designs will be presented to a panel of judges at the end of April, and with the current restrictions likely to remain in place for at least a while longer, that’s likely to be on one of the virtual platforms, which in itself will be yet another challenge!

It’s been an absolute pleasure to work on this design and whatever the final outcome of the competition, I’m thrilled that this space will be developed into a beautiful garden that visitors can enjoy for many years to come.

Summer Time and the Trimming is easy